Music Day at the Museum was finally held using our new performance deck! 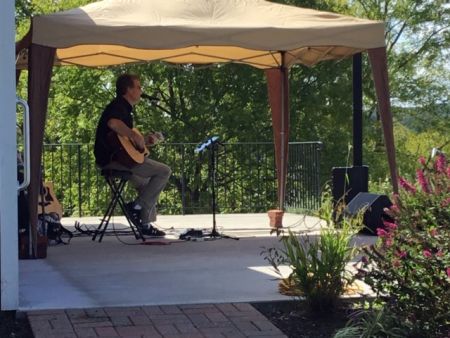 Musical guest Sean O’Flynn, a guitarist/vocalist, resides in Sussex County NJ  His influences cover a wide range of artists from classic and southern rock to country, blues and some folk.  Throughout the years, he has been a part of many bands that have come and gone, one of which had some successful openings for bands like Marshall Tucker, The Outlaws and New Riders of the Purple Saige.

In 2015, he decided to perform almost exclusively as a solo act and hasn’t looked back.  He performed over 170 shows in 2019 alone.  His voice has been compared to a mix between Greg Allman, Travis Tritt and Neil Diamond and along with his guitar playing has earned him dozens of five star reviews.  He has an eclectic mix of music including covers of artists like The Eagles, Neil Diamond, Cat Stevens, Pink Floyd, The Allman Brothers, Gordon Lightfoot, Van Morrison, Neil Young, The Rolling Stones, Bruce Springsteen and many more.!

It was a gorgeous summer day for our guests to enjoy outside listening to Sean’s musical selections!    Sean  - you are invited any time!!